This DVD uses a different approach compared to previous releases from Colorado Plateau Geosystems in that it packs 60 time slices into two geologic periods, Jurassic and Cretaceous. The Late Cretaceous has especially closely spaced time slices, many less than ½ million years apart. This allows for accuracy in examining narrow slots of geologic time. The series traces the history of North America’s Western Interior Seaway from its inception in the Jurassic to its demise near the K-T boundary. The rocks deposited during the numerous marine transgressions and regressions in both continental and marine environments contain vast natural resources including hydrocarbons and coal, rich dinosaur remains, widespread ammonite fossils and other fossil remains, and important scenic resources in numerous National Parks and other scenic areas. Additionally, these rocks have formed the basis for modern stratigraphic studies including sequence stratigraphy. The fact that these rocks as a whole, comprise the most studied rocks on Earth, allow the details presented in this series possible.

The region covered ranges from the Yukon and adjacent Eastern Alaska, through British Columbia, Alberta, and Saskatchewan, southward through the US Western Interior, and south and east through the Southern Plains to the Gulf Coast.   Also detailed is the Cordilleran region from Alaska to Mexico and the important Sevier Thrust Belt. The relations between the Cordilleran accretion and magmatism, the growth of the Sevier Thrust Belt, and patterns across the Western Interior Seaway are clearly shown.

Late Cretaceous time slices are tied to the Cretaceous biostratigraphic zones, mostly ammonite zones. Some maps have additional brief descriptive names. The chronostratigraphic ages are given in millions of years ago (Ma) and follow the time scale of Gradstein and others (2004). The ages of the fossil zones given on the maps identify the first appearance of the fossil zone; most Late Cretaceous fossil zones lasted less than one-half million years, some less. The Period-Epoch-Age/Stage names also follow Gradstein and others (2004). Ages from the newer 2012 Time Scale are given in parentheses on the Time Chart included on the DVD. Most changes between the two time scales are very small and have little effect on the maps.

A five-part diagram shows the relations between Cretaceous shorelines and transgressive-regressive events. Six text files include map explanations and keys as well as construction information, and 17 pages of references – the sources of data used in constructing the maps. These new maps use the same construction methods that were used on the Key Time Slices of North America Series.

Full-resolution maps use the same scale and projection as the North American Key Time Slice Series but are cropped to show the area of interest: the Cordilleran region, the entire area of the Western Interior Seaway, and the western and central Gulf Coast. The paleogeography closely follows that of the Key Time Slices Series with the following changes. In the Cordilleran region, the accretion and translation of Wrangellia follows the Model of Wyld et al. (2006) whereas on the Key Time Slices the model of Umhoefer and Blakey (2006) was used. The Wyld et al. model is a bit less complicated and less distracting as far as the Western Interior Seaway is concerned (this allows attention to be focused easier on the Western Interior Seaway). Seven Key Time Slice maps (130, 115, 105, 92, 85, 77, and 72 Ma) overlap with the WIS maps. Minor changes, mostly in detail, were made in shorelines to reflect better control and more data used in the WIS maps. A huge volume of references was used to generate the patterns of the Western Interior Seaway and adjacent landscapes. Voluminous paleontological work and radiometric dating of numerous bentonite beds (altered volcanic ash) coupled with excellent outcrop exposures and immense subsurface data provide the basis for the detailed basin wide correlations.

Some areas of the Canadian Shield, Appalachians, and the greater Great Lakes regions lack Cretaceous rocks. These areas are shown more or less constant on most of the maps. This does not mean that these areas didn’t change during the 140 million years covered on the various maps, but rather reflects a lack of data to enable changes to be shown.

Movements in the Sevier Thrust Belt follow the detailed reconstructions of DeCelles (2004). The Cordilleran and Sevier regions are palinspastically restored following Dickinson (2011; 2013).

Eight sections from Texas to Central Alberta show the patterns of transgression and regression of the Upper Cretaceous Western Interior Seaway. Key stratigraphic names are also included. Vertical scale is geologic time and not stratigraphic thickness. Cross sections are keyed to the paleogeographic maps. For example, Late Turonian maps 4 and 5 show the maximum progradation of the Ferron Ss delta in Central Utah; cross section D-D’ clearly shows the Ferron Ss tongue into the Mancos sea during this same interval.

The references citied is a list of the sources of data used in constructing the maps, cross sections, and other figures of the DVD. These references and references included within these papers document the vast wealth of data available for the Western Interior seaway.

The greatest detail and accuracy of the maps includes the Western Interior Seaway and Gulf Coast from Alberta to East Texas. Shoreline features are based on the nature of the shorelines with respect to patterns of transgression, regression, regional subsidence, and sediment supply. Individual bars and coastal indentations are diagrammatic but based on data from the literature. In other words, a given barform shown on the map is not necessarily showing a specific bar, but rather represents the nature of a known or inferred barred coast – what the coast might have looked like rather than what it did look like. The geometry of the western coastal pain is constrained by the position of the shoreline and the position of the Sevier thrust belt at any given time. Orientation of rivers is from paleocurrent data. The geometry and movement of the thrust belt is from DeCelles (2004); palinspastic restoration of the Cordilleran region is after Dickinson (2011; 2013). The location of Wrangellia at 100 Ma is after Wyld, et al. (2006).

Water depths, suggested by shades of blue, are qualitative, not quantitative. Very pale shades suggest deposition above wave base with water depths 0-50 m (0-150 feet). Deepest waters were likely towards western edge of sea as that is area of maximum subsidence (but also highest sedimentation rates). During rapid sea level rises, sediment was trapped near shore so water depths were likely greatest then. Maximum water depths may have been grater than 200 m (600+ feet).

The eastern shoreline and coastal plain are less well known. Nearly all Upper Cretaceous deposits on the eastern margin of the seaway lack preserved shoreline and coastal plain deposits – commonly easternmost deposits consist of offshore marine deposits that formed some uncertain distance offshore. Various extrapolation techniques based on scattered data such as Cretaceous rocks and fossils in Pleistocene glacial deposits provide some constraint. Deposits in the Hudson Bay area are speculative (see Ziegler and Rowley, 1998).

Jurassic rocks lack the precision of correlation available for Cretaceous rocks, especially with respect to the widespread continental deposits. The map time-slice intervals are longer that those of the Cretaceous. However, Jurassic rocks are widely exposed in excellent outcrops and their stratigraphy, facies patterns, and depositional history are generally well known. Western and southern margins of Jurassic outcrops are erosional; the eastern margins are better preserved and many shoreline deposits display depositional pinchouts of marine strata into adjacent sabkha and eolian deposits. 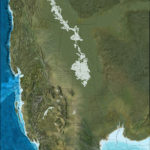 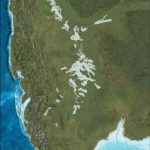 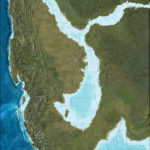 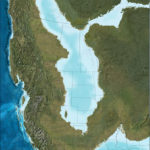 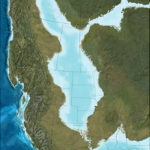 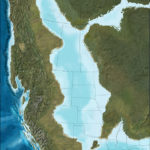 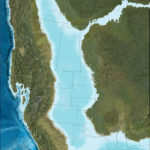 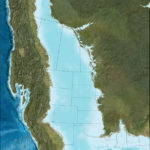 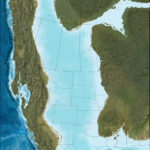 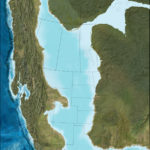 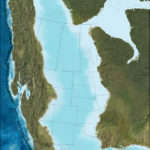 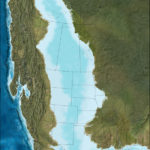 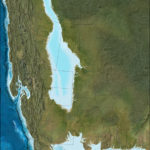 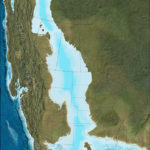 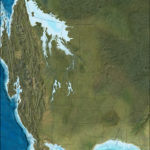 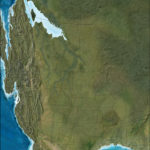 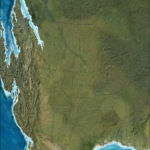 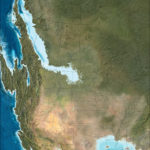 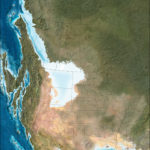